Get your Free 30-day trial here 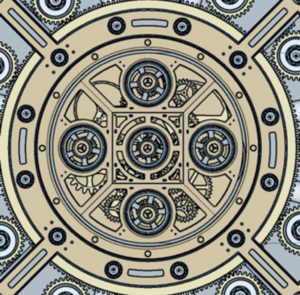 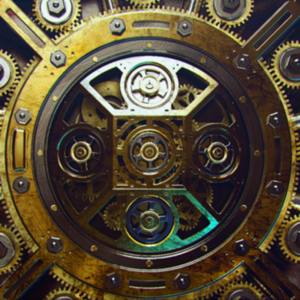 “Artemis Fowl: Safe design Lovely prop to work on, super detailed as it was built and automated by the talented folk in the propshop!

Meshing gear, dials and Swiss clock like automation, allot of visual movement in this. I wanted it to look like the inside workings of a pocket watch, ticking mechanisms just visible behind the decorative face” – Chris Rosewarne

Chris Rosewarne, involved in designing props for Oscar award winning films that have taken the industry by storm as we rise out of lockdown in 2022 has now opened up about his SketchUp and concept designing journey, how he creates complex designs from concept to completion and some exciting new projects coming up this year.

Chris, studied Art at St Martins College of Art and Design and went onto do a Model Making Degree Course at Bournemouth. Spending his childhood building things such as Lego, his desire to be hands on with creating and building things, alongside his interest in comics and movies led his path to becoming a model builder for the film industry. 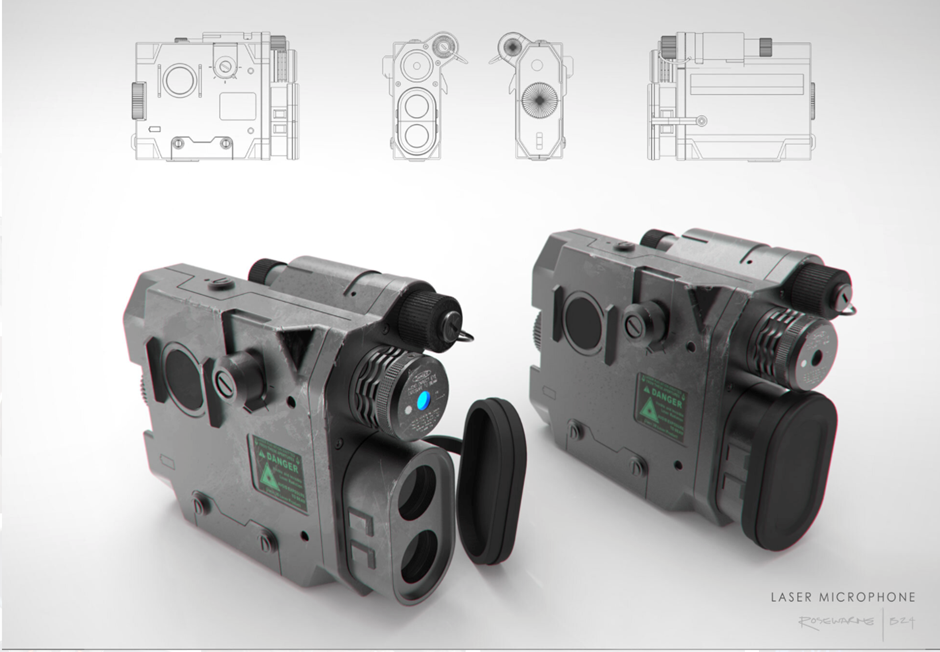 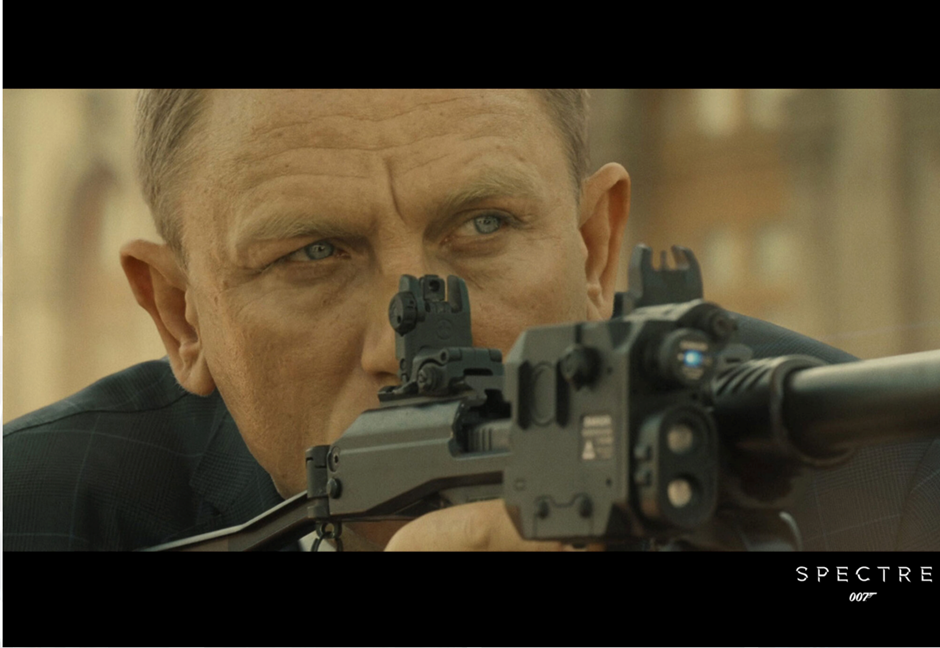 “James Bond: Spectre – cool little prop to design, a laser microphone gun attachment! 🚀 Had a couple earlier designs rejected in favour of the more utilitarian aesthetic which work well for the feel of the series. It’s hard to sometimes play-down a design, but that’s also a look all unto itself, very good lesson to learn!” – Chris Rosewarne

While Chris was studying he was lucky enough to secure a work placement with Artem, a visual effects company in London. As time past, he then begin to move into the design space and away from building, creating storyboards, illustrations and concept art.

Working on Tim Burton’s Dark Shadow was Chris’s first exposure to SketchUp. After learning the basics of 3D modelling in college, his career had been in total 2D until now.

Speaking to other art directors, SketchUp was described as ‘Extremely Simple‘, they can scan elevations and import them as technical drawings. They then give Chris screen grabs to paint over and bring them to life. Gradually Chris begun to start using SketchUp and build his knowledge over time.

Soon after, Chris started a job on Die hard and decided to try designing in SketchUp, he watched some tutorials online thinking “how do I do this!?” Thankfully Google and YouTube came to the rescue, people had created tutorials, the support system for SketchUp was great and he was finally able to start building on his knowledge. 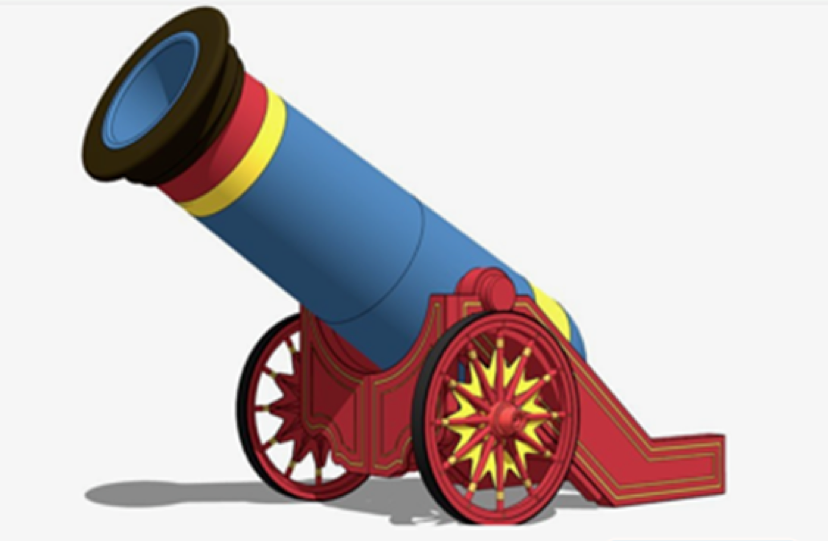 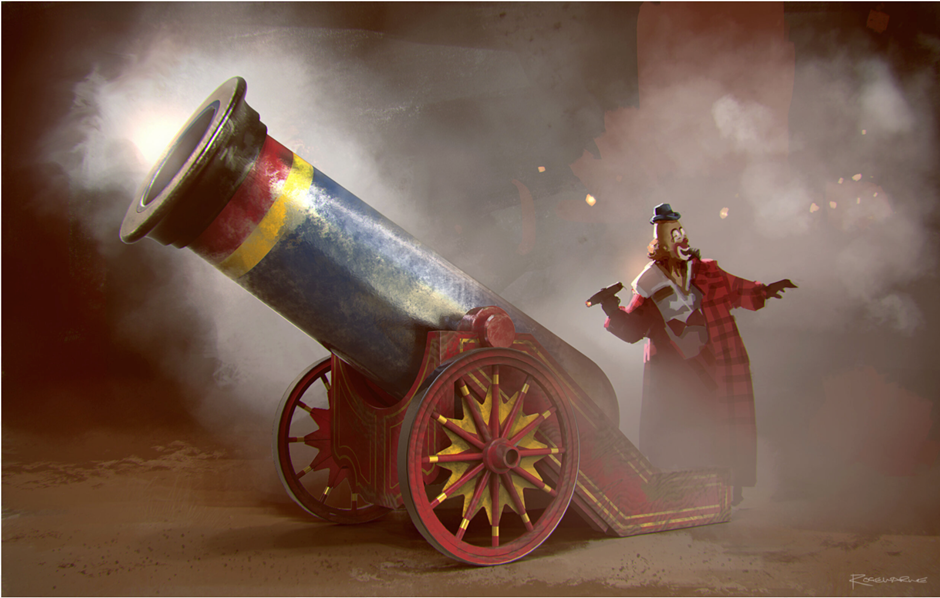 “Tim burton’s Dumbo circus prop designs. Giant circus cannon. It’s always nice to switch genres in film projects, I love tech and sci-fi but a period movie project is a good “palette cleanser”, I really enjoy doing the historical research for these designs, fascinating to see what was made and built before!” – Chris Rosewarne

Over the years Chris has really begun to push the level of detail on SketchUp, as he begun to render designs to being the concept to life so that the complexity of the 3D model was mirrored in the final render.

When Chris was a child, building Lego was a large part of life and enjoyment. Thus now designing models for award winning films he used his theory of building Lego models in SketchUp. Creating more complex designs geometrically so, when these designs are rendered, the detail was there. To save time, Chris would often create a detailed component in quarters, once the first quarter was done all he needed to do was mirror this component, so the software really does alot of the heavy lifting.

SketchUp has everything in the tool box early on that means designers like Chris can think simplistically, the flow between ideas and screen becomes a lot more streamlined.

I love that SketchUp has a simple viewing port so when other designers need to view my work it displays good graphics simplicity. I often find half-baked ideas present and communicate the concept well throughout the design journey. 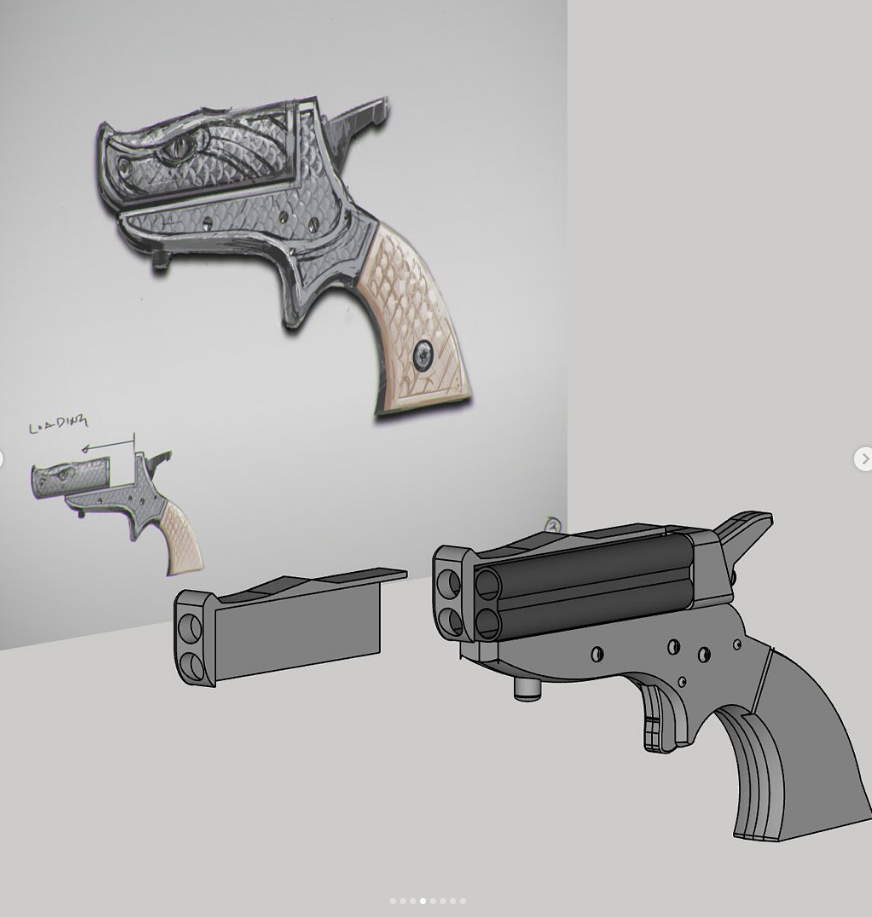 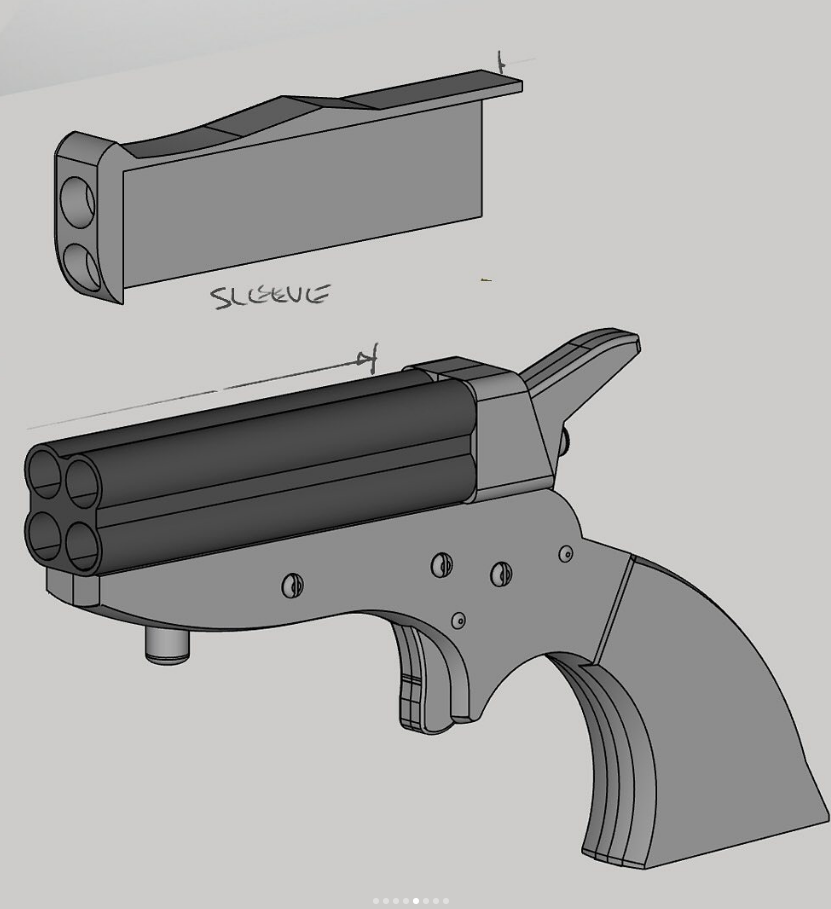 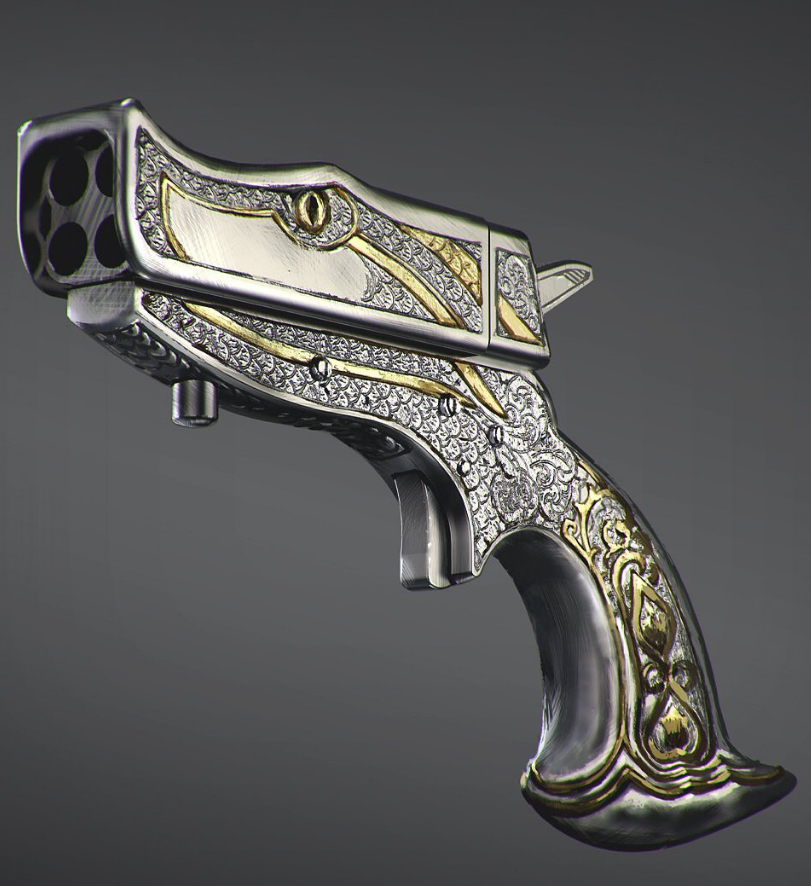 “Death On The Nile (spoiler alert!) lovely little brief, designing Jacqueline de Bellefort’s 22 calibre pistol. Based on a Sharps Model 1A Pepperbox. The script described it as being heavily engraved in the design of a serpent.

I created a cover to dress over the 4 barrels to give us a surface to engrave into, the prop makers did an amazing job with this one!” – Chris Rosewarne

At SketchUp 3D basecamp, people wanted to know how Chris does what he does. He opened up and admitted he actually probably one of the worst technical modelers at the event. He specialises in design work which is polar opposite to technical designers.

Chris flows ideas and aesthetics from mind to software using a lot of detail but overall creating pretty simple designs. The distinction between himself and technical designers is the method of design. Chris will focus on the visual aspect, technical designers take a more practically approach to the design, ensuring objects are water tight etc. 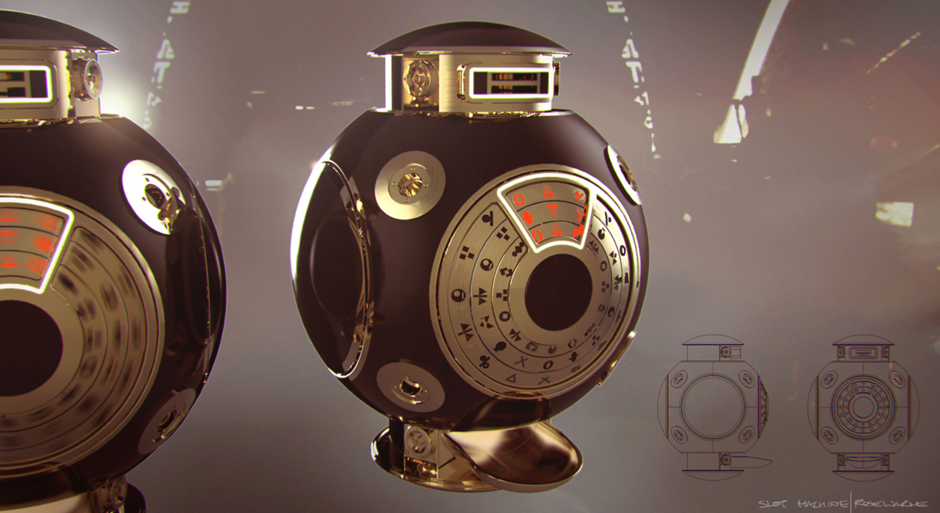 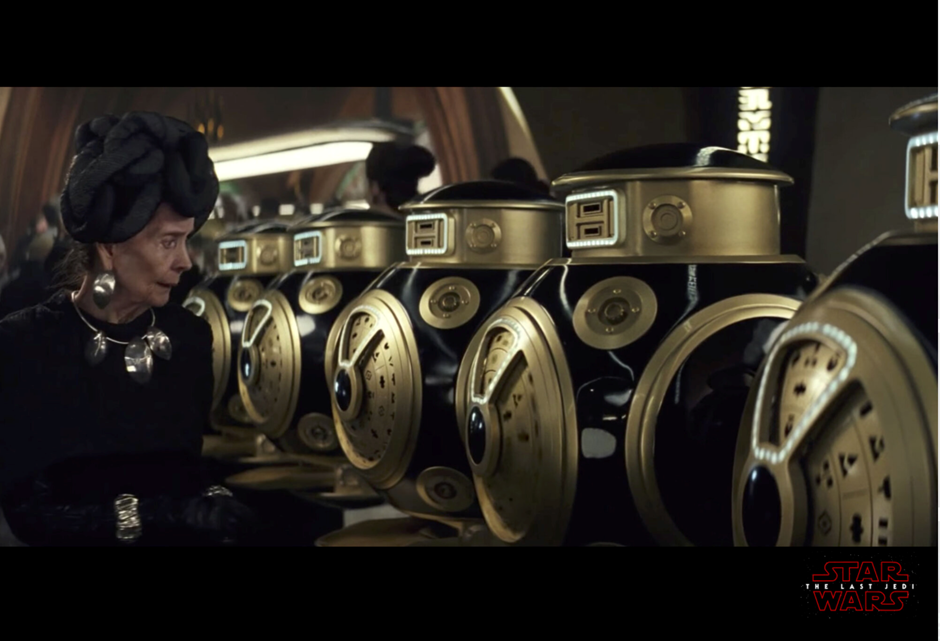 “Star Wars archives: casino droid, went though various designs with the only constraint that it had to look similar to BB8 This one reminded me of Vincent from Disney’s The Black Hole another strong childhood favourite of mine!” – Chris Rosewarne

A lot of what I am comes down making items look aesthetically pleasing, it often comes down to composition and framing, you could spend a week modelling a robot for example but the way it appears on screen is cropped, with the lightning and framing edited to give it a cinematic effect.

Finally we asked Chris for some of his proudest works, it was a hard job to decide, Chris mentioned there are two types of proud for him, the projects he enjoyed creating and designing, and the end results most popular with the audience.

One of they key favourites was the design of Quills gun from Guardians of the Galaxy, there are some images below, but if you would like to see the full workflow, click here for a short video from concept to creation.

Other personal favourites for Chris included the Sniper Rifal for Skyfall and the star wars casino drones. 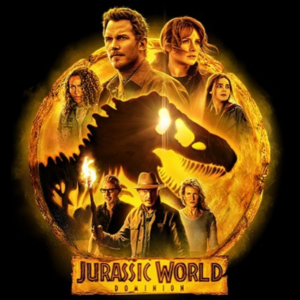 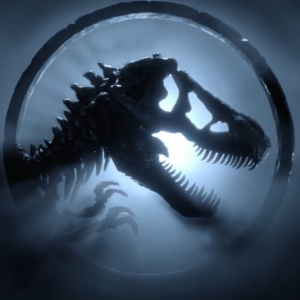 Jurassic World is the next release Chris has been working on recently alongside up and coming films DUNE 2 and Meg 2 awaiting a release date in 2022/23.

To see more of Chris’ work, 3D modelling designs and renders, you can find them on social media here:

So who is Chris?

From where he calls home in the digital design space, to his secret SketchUp power, you’ll find the ins and the outs of his SketchUp Journey here…

If you want to have a personalised SketchUp top trump made for you, email us at marketing@elmtec.co.uk and let’s get the ball rolling! 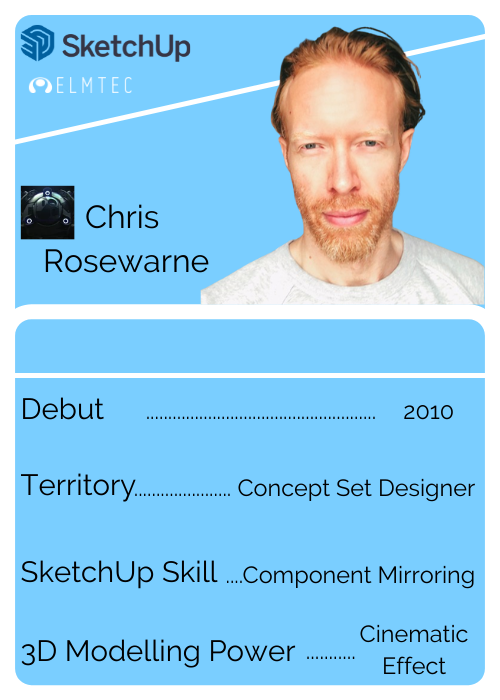 Elmtec have been the UK distribution partner for SketchUp since 2010, and service a network of UK and Irish resellers. We have over 22 years’ experience within the digital design community.